Apple TV vs Roku: Which is the Best Streaming Device 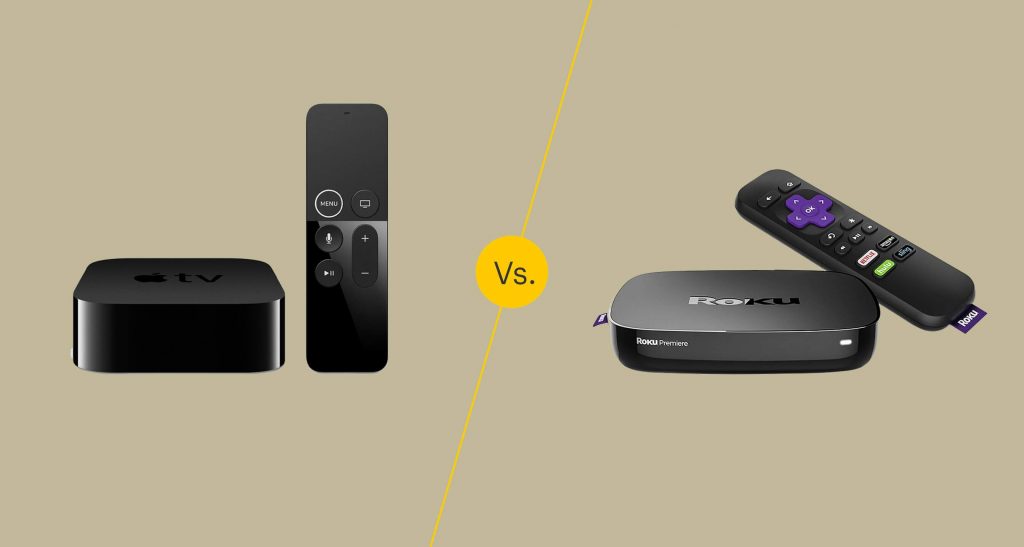 What is Apple TV

Merits and Demerits of Apple TV vs Roku

Related: How to Get Apple TV on Roku Devices Easily

Both devices stream the contents in 4K and HDR quality and have ethernet ports also. So you can have a wired connection and watch the media contents.

When comparing streaming quality, Roku is best. Because it supports the same feature on Apple TV, but the cost is low.

Apple TV 4K is compatible with HD and UHD, and it supports mostly apple products.

Roku Ultra is compatible with HD TVs, 4K TVs, and 4K HDR TVs. So here, Roku wins to be the best compatible device.

Related: Roku Ultra Review: Everything You Need to Know Before Buying

Apple TV 4K comes with a Siri remote. With this remote, you can use your voice to navigate on Apple TV. But Roku doesn’t have a Siri remote.

Both devices follow the same process for setup. You can just plug in both devices to your TV’s HDMI port. And you can download apps from the App Store for Apple TV 4K and the Roku channel store for Roku Ultra.

Apple’s interface is very easy to navigate, and it saves your login details for all the subscribed channels and Apps.

But the Roku interface is outdated and slower, and it shows a different layout for different apps. So comparing the interface on Apple TV and Roku, Apple TV wins.

Apple TV has an Airplay feature. With this feature, we can cast videos from other iOS devices. But Android and Windows users can’t cast or mirror contents on Apple TV.

If you own a Roku TV, you can use the built screen mirroring on Roku. With this function, we can cast media content from Windows and Android.

So for mirroring and gaming Roku will be the best option for the users.

Based on what we have researched, both are equally comparable in all aspects. The main difference is the price for both devices. When comparing prices, Roku is recommended because we get almost all the features available in Apple TV. And you can get Roku’s high-end streaming service, and the price is affordable to everyone. Tell us your opinion and which is your favorite streaming device.

How to Get Discord on Apple TV [2 Methods]