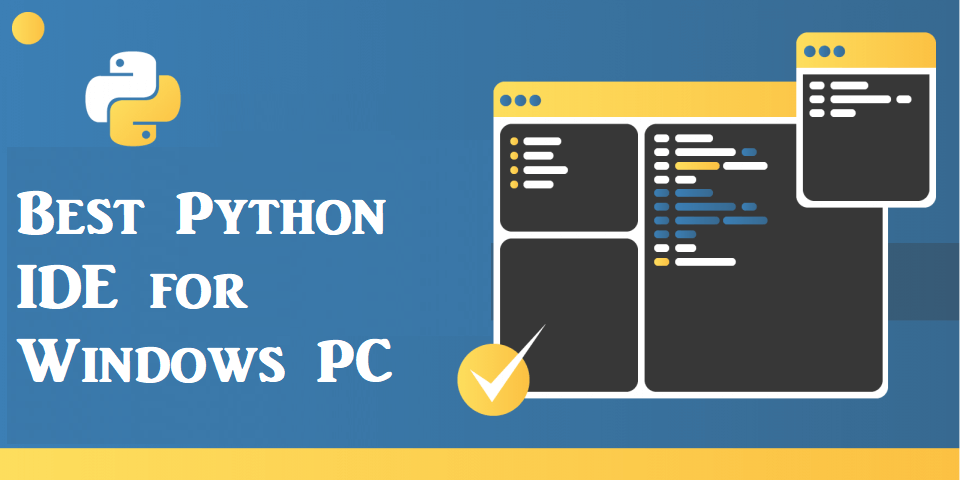 Python is one of the most used programming languages by developers to develop code. It has high-level language with built-in data structures, dynamic typing, and binding. All these features make Python IDE very attractive for rapid application development. Mostly Python IDE is used to create and manage apps for desktop and web, scripts, and more. Python IDE is available for various platforms, and when you search for the Python IDE for Windows, you may find a lot of options. If you aren’t sure about choosing one, you can check out this article for the best Python IDE for Windows in detail.

The best Python IDE any Windows PC user can use is as follows. They are listed in no specific order, and you shall choose any tool that impresses you in terms of features.

PyCharm is the top most widely used Python IDE for Windows. It is a professional-level IDE by JetBrains for professional Python developers. It provides a powerful array of features to support the latest development. With this Python IDE, you can work easily on your big projects. It provides smart code completion, code inspections, automated code refactoring, a test runner, and an integrated debugger.

PyCharm supports web development frameworks like Flask, Django, and Pyramid and also supports CoffeeScript, JavaScript, CSS, and TypeScript. Further, it lets you access almost all the databases from IDE. In addition, it has a live editing mode. It is available for free, and the premium version costs $199.

IDLE is a default IDE that comes with Python and is one of the best Python IDE for Windows. It enables you to search and replace within any Window. Further, beginners can learn Python easily with this IDE. Since the shell Window of IDLE is interactive, you will be able to see the code input, output, and error messages in color.

It provides you higher flexibility with the Tkinter GUI. It is yet another open-source and free software.

It is one of the Python editors to support multiple languages. The software is open-source and free.

PyDev is a Python IDE that runs in Eclipse, and it is a popular open-source IDE for various programming languages. It also can be used in Jython and IronPython development. Using PyDev, you can access code analysis, debugging, type hinting, and refactoring.

With this IDE, you can create Google App Engine. Above all, you can configure Django integration. It is yet another free and open-source Python IDE.

Related: Best LaTex for Windows PC You Will Need

Sublime is one of the best Python IDE for Windows. It is a sophisticated text editor for code, markup, and prose. It supports different languages, including Python. You can highlight syntax here. Additionally, it allows multiple selections, customizable key bindings, split editing, cross-platform usage, and more.

It is easy to use Python IDE software and is available for free. The Premium plan costs $80 with a free trial.

Visual Studio Code is an open-source software developed by Microsoft. It is good for writing and debugging Python and Java-based applications. Visual Studio Code is a useful tool to write and update our script quickly. Furthermore, it provides extensions to add a new language, debuggers, themes, and more. With this IDE, you get the features of syntax highlighting, auto-completion, find and replace, code folding, and more.

Jupyter is one of the best Python IDE for Windows. It supports multi programming languages. It allows the users to create and share documents that contain live code, equations, visualizations, and narrative text. Above all, the best features of Jupyter are file management, customization, patching and updates, straight out the box functionality, and more. Further, it is available for free.

Wing is a lightweight yet full-featured Python IDE designed especially for Python with powerful editing, code inspection, testing, and debugging capabilities. Besides, it has a live run time feature that provides feedback immediately after writing your Python code. Similarly, this editor also supports code inspection, PEP8 enforcement, and auto-enter. Overall, it is a great Python IDE and debugger. Wing is a free app, and the Premium plan starts from $95.

Thonny can be the best choice for those who are new to Python. The user interface is very easy to use, and this IDE is free. It separates the Windows for executing function calls. And Thonny also supports CPython and MicroPython. In addition, it automatically spots the error. Like other IDEs, it requires a larger device space.

Eric is an open-source and full-featured Python editor and IDE written in Python. It has advanced search functionalities, including project-wide search, replace, etc. Further, it has unlimited editors, error highlighting, source code folding, and more. Eric is integrated with COBRA, unittest, protobuf.

We hope this article has clearly explained the 10 best Python IDE for Windows PC you could rely on. Python IDE is helpful for all developers to create web and desktop applications. With the information provided here, you can select the best Python IDE to use in Windows.