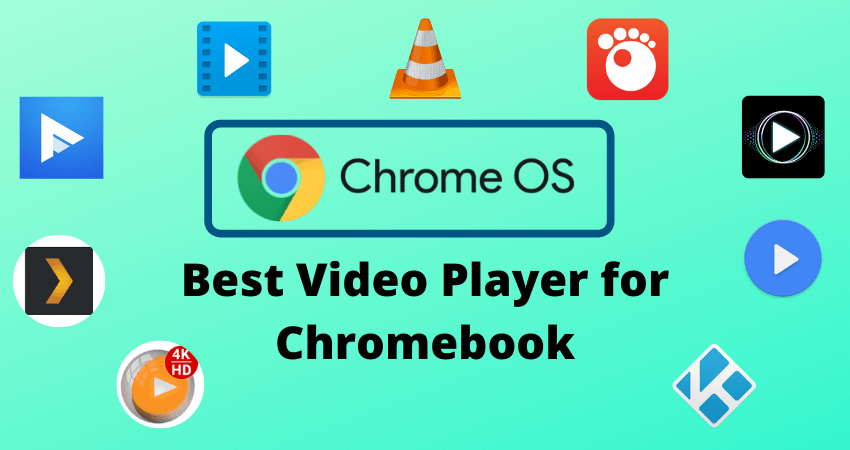 Chromebook is a combination of a laptop, detachable, tablet and you can make the choice on how to use it. It runs on ChromeOS designed especially for Chromebook devices. ChromeOS is similar to that of Android OS in which you can download and install apps as you do in Android via play store. Not all apps from the play store are available on Chromebook but it hosts a vast library of Google-approved apps. Chromebooks are simple, lightweight, multipurpose, and easy to use. You can watch movies, browse, edit pictures/videos, draw/illustrate, develop apps, and do many more with it. Today, you are gonna know about the best video player apps to play all your videos in your Chromebook devices.

Some of the Best Video Player for Chromebook

The VLC media player is one of the most popularly used media players on almost every device. It is available for almost all devices that include Chromebook. The VLC media player is not only used as a video player but also can be used as a complete audio player where you can create a playlist, use an equalizer to tune audio, and do many more. Coming to the video player part, it can play almost all the video formats (MKV, MP4, AVI, MOV, M2TS, Wv, and AAC. Also, it can network stream video from IPTV and many more which include adaptive streaming.

Like VLC player on desktop and smartphone, it supports multitrack audio and subtitles, auto-rotation, aspect ratio adjustment, and gesture control for brightness, volume, and seeking. If you are looking for the best video player for your Chromebook with the complete package then the VLC media player can be your best choice.

MX Player is a video player app that is now also a streaming platform with a wide range of content in it. It has some cool new features like Multi-core decoding, hardware acceleration (like HW+, HW, and SW decoders), and kid lock to provide you kid a seamless video watching experience without any interference. MX player is not only feature-rich but also gesture rich, so talking about gesture it has pinch to zoom in/zoom out and pan video, brightness, seeking, volume, and most importantly the subtitles gesture like pinch to enlarge subtitle, scroll left/right to seek subtitle and move up/down to move subtitle. It supports almost all the video and subtitle formats.

Wuffy Media player is one of the best IPTV players for Android devices which is not only used as an IPTV player but also can be used as an effective video player. It supports all video (mp4 DivX, Flv, m3u8, Mkv, MOV, mpg, mts, Ogg, Rm, Rmvb, ts, WMV) and audio formats (mp3, aac, ac3, amr, DivX, h263, h264, hevc, mpeg2, mpeg4, speex, vp9, WMV) that we use the most. Like MX player it also has features like multicore decoding, multi-track audio & subtitle support, and screen control for brightness, volume, and seeking (screen control means you need to tap on the respective icon for the action). Also, it enables us to use protocols like HTTP, https, MMS, RTMP, RTSP, Acestream, and Torrent. The only disadvantage in this app is ads and there is no pro version or ad-free version to avoid it.

The Power Media player is a media player developed by Cyberlink which is well known in the field of several video-related tools and applications. It has a colorful and smooth user interface. You can use it as both video/audio player and image viewer with features equalizers, one-click touch-ups, gesture to brightness, volume & seek, and many more. Power Media player supports all commonly used video (H.264, H.263, MPEG4, MP4, 3GP, M4V, MKV, VP8, FLV, RM, RMVB, MOV) and audio (DTS, AAC, FLAC, MP3, MIDI, PCM/WAV, Vorbis, M4A, ALAC, APE, ADTS, AIFF, AU) formats. The most important feature among all is that it supports 360-degree video and photo playback. If you want a video player with 360 degrees compatible then power media player is the best choice for your Chromebook.

PlayerXtreme Media player is a cross-platform app for Audio and video player. It has all the features that are available in common video player app like gesture control (brightness, volume and seek), multi-track control, audio & subtitle synchronization, and background mode in which video will play in the background while you can listen only to the audio. It plays almost every audio and video format including 3gp, asf, Avi, DivX, DV, DAT, Flv, gxf, m2p, m2ts, m2v, m4v, Mkv, MOV, Mp4, MPEG, mpeg1, mpeg2, mpeg4, mpg, MPV, mt2s, ts, mts, mxf, ogm, ogv, ps, qt, rm, Rmvb, ts, VOB, WebM, wm, WMV. PlayXtreem has a library feature in which we can add all our video, image, and audio arranged in beautiful bookshelf format and can easily access it. One of the most highlighting features of PlayerXtreme media player is that it supports casting on all devices easily.

Plex is a streaming platform cum video player. In Plex, you can stream movies, video, audio, live TV, podcast, and many more. On the other hand, you can use it to organize and play video from your own media and has features like screen control for seeking audio playback, subtitle, and audio synchronization, and some more. It does not have many features like the above-mentioned apps but you can watch videos seamlessly without any interruptions in it. Plex has targeted mostly over its streaming platform so there are no big changes in its video player. In our opinion, if you are bored with all the other apps listed then you can give a try to the Plex media player.

Price: Free (with ads), Premium – $4.99 per month (Advanced audio, movies and TV shows and many more)

GOM player is a popular and well-known media player that has an amazing user-friendly UI. It has features like speed control, finger gesture, subtitle and audio synchronization, and many more. It has a sleep timer function in which you can set time to automatically turn off the screen. You can add videos to favorites to access it easily. Also, it supports cloud storage for all your media and can be linked with dropbox, google drive, WebDAV, FTP, and Transfer list. It has a VR theatre mode that gives Theatre movie watching like experience and hands-free control over the video playback. VR Threatre mode is like a mini theatre. Just give a try to experience this feature and you will never regret it.

Kodi is an award-winning media player cross-platform. Not only as a media player but it is mainly used for streaming with the abundant availability of Kodi addons. It provides you with an interface for easy browsing and viewing of your media file like photos, videos, audio, etc. It has a complete landscape UI with multiple features in it. Kodi has a wide variety of features like screen gesture, subtitle & audio synchronization, and many more. Apart from a video player you can watch and listen to Radio, TV, music videos, music, and more. In Chromebook, you can download and install Kodi directly from the play store or add and use it as an extension.

Archos video player is a video player application that is available and works well on Chromebook. It supports features like multi audio and subtitle track, HW accelerated encoding, subtitle synchronization, and many more. Some of the new features are audio boosting even on poorly audio encoded files, etc. It supports various video formats (MKV, MP4, AVI, WMV, FLV, etc) and subtitle formats (SRT, SUB, ASS, SMI, etc). Also, another cool feature is that the Archos player has been integrated with a 3D player that can be watched with suitable movies and gears. It almost has all the common features available in every application like audio synchronization, subtitle synchronization, screen controls, and many more.

CnX Player is one of the powerful players that can play video in any resolution like 4K, 2K, 1080p, HD, Full HD, 4K Ultra HD, etc with smooth and ease. It has some common features like Auto rotate, switch decoder (HW, HW+, SW), and screen gestures for brightness, volume and seek. It has codecs integrated within the CnX player like H.265, X265, HEVC, H.264, X264, AVC, VP9, VP8, VC1 MPEG-4 & MPEG-2 and supports video formats like MP4, MKV, 4K, TS, WEBM, XVID, AVI, FLV, VOB, 3GP, MOV, etc. Also supports several other audio codecs. It provides you with multiple colorful and cool themes. Also, you can use other apps while playing video by converting your CnX player to a floating window.

Price: Free (with ads) or upgrade to pro version at $5 (ad-free and video casting on Chromecast and Fire TV support)

In case if there is no play store app available in your Chromebook, follow the steps to enable it.

[1] Open Settings in your Chromebook.

[3] Under Apps click on the Turn On icon to enable Google PlayStore in your device.

All the above-mentioned Video players for Chromebook are listed in no particular order. You are free to choose any application that ticks all boxes that you expect in a video player application. Let us know if we missed any video player in the comment section below.

How to Install and Watch TSN on Apple TV [ 2 Ways]