How to Set Alarm on Fitbit using 4 Different Methods 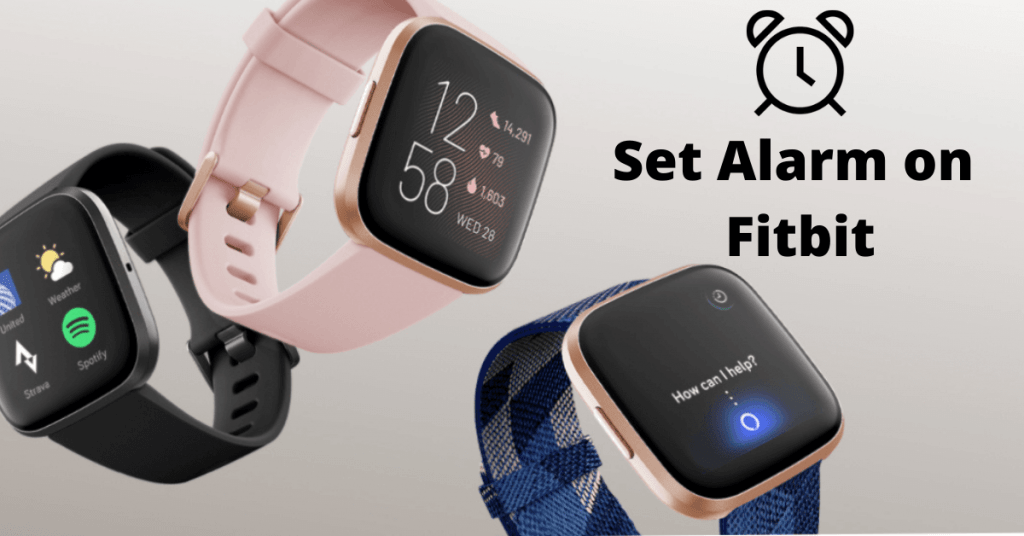 Fitbit is a wearable device that helps you to keep track of all your health routine. Apart from that, it notifies you with message, calls and also it lets you to quick reply for messages. Also, you can sync Fitbit with your Android and iOS devices using the Fitbit app available on both play store and App store. By syncing your Fitbit all your daily activity records will be stored and can be accessed anytime. In the upcoming article let’s see some of the ways to set alarm on Fitbit.

Below are trackers and smartwatches that are currently available. The Alarm setting procedure varies depending on the model you are using.

How to Set Alarm on Fitbit device?

[1] Turn on your Fitbit device.

[2] Tap on the Alarm app from your device.

[4] Set the hour and minute by swiping the number up and down.

[6] By swiping down you can also choose the days in which the alarm need to be repeated.

[7] Once all set click on the back button on your Fitbit device and now your alarm is ready to wake you up.

How to Set Alarm on Fitbit using Smartphone, PC, and APP?

For all other Fitbit models, you can use the below methods to set alarm. You can set alarm using,

[2] Open the Fitbit App in your smartphone.

[3] Tap on the profile icon from the top left corner.

[4] Under device select your device image.

[5] Scroll down and tap on Silent alarms.

[7] Set the alarm time (Hour and minutes) and frequency

[8] Once all set, tap on save to set alarm on your Fitbit device.

[3] Click on the + icon (add icon) from the top right corner of the dashboard.

[6] Set the time and frequency of your alarm.

[1] Open browser in your smartphone or PC.

[3] Select the Setting icon (gear icon) from the top right corner of the screen.

[4] Under settings menu select your device.

[7] Enter the time of your alarm in HH : MM format and also set its frequency.

[8] Click on Save, your alarm will be synced to your Fitbit device.

Related: How to Set Alarm on Apple Watch?

Now you have set an alarm on all your Fitbit device also you can turn it off/remove the alarm any time you need just by clicking the remove button below the alarm menu. If you have any doubts about setting alarm in your Fitbit devices make use of the comment section below. For more tech updates explore the site.